A TOAST TO DARWIN
Looming major on the godless horizon is the Darwin Day celebration at Redline next month. It is, in the words of organizer Tom Clark, an occasion to "encourage organizations and individuals to celebrate Science and Humanity." We'll be gathering with other secular-minded, science-lovin' products of evolution, to raise a glass on the occasion of Charles Darwin’s birthday! Free admission, appetizers and birthday cake, plus food and drink at regular prices. Guests are invited to bring toasts, poems, limericks, readings, stories, songs, Darwin impersonations, and whatever else might add to the festivities as we honor the man who put us in our rightful, natural place. Join us on Tuesday, February 12th, at 7 pm at the Redline Bar in Harvard Square, Cambridge.

BOSTON ATHEISTS LADIES NIGHT
Under the joint auspices of Boston Atheists and Skepchick.org, several of our Boston Atheists have decided to host a "ladies' night" as a chance for women atheists, skeptics and freethinkers to gather together for camaraderie and conversation. Having noticed that, in general, more men tend to attend Atheist meetings, they have decided to join forces with Skepchick.org to get more women atheists and skeptics out in numbers. That will provide them with the opportunity to discuss issues related specifically to women and atheism. It is not, however, intended to be a splinter group or to encourage gender separation; on the contrary, they hope this meeting will encourage more women to attend the regular Boston Atheist meetings in greater numbers! The first such event will be held at BA member Danielle's house. There'll be wine, snacks and desserts. Feel free to bring any interesting skeptic / atheist reading matter along. Since this is the first meeting of its kind, we can discuss what people would like to get out of future ladies' nights. If you have any questions, get in touch with one of the organizers, Nora and Danielle, via the Meetup site. Nora asks that those interested in attending please RSVP to delaney_nora@yahoo.com so they can gauge numbers. "Ladies Night" will take place next Thursday, January 31st, at 7 PM, at Danielle's apartment; information and RSVP instructions are at the Boston Atheists calendar.

BODY, MIND, AND STUPID EXPO
Emily Maloney, writing for the very excellent magazine The Smart Set, reports on her encounters with pet psychics and aura cleansings on a visit to the "Body, Mind, and Spirit Expo" in Oregon last month. I think she mixes a laudable compassion with her skepticism -- even as she easily sees the absurdity of, for example, the purported healing powers of a photocopy of a handprint, she writes kindly of the credulous:

... now that I am a few days away from the expo, it seems clear that some people just want to be forgiven for backing over their cats in the driveway, or else they want to hear they were Joan of Arc in a past life, if only because in this life they are speech therapists for the school district who seriously value their summers off. Their basements flood in the winter. Their little brother can’t stop going to jail. They are allergic to wheat gluten, and no matter how hard they try not to be, they are apple-shaped. I forgive them all.

AMERICAN ATHEISTS CONFERENCE
The 34th National Conference of American Atheists has been scheduled for March 21st-23rd in Minneapolis, MN. At the conference, Atheists will gather for workshops, panels, and other activities, as well as talks by such noted speakers as Prof. Richard Dawkins, AA president Ellen Johnson, Prof. Jack David Eller, Frank Zindler and Dennis Prager. Anyone interested in being a part of the political and civic activism growing among the Atheist community in this country should strongly consider attending.

ON FAITH
The Washington Post's "On Faith" section has over the past year become a destination for news and commentary on religion and irreligion on America. Some of it is inane -- for example, the post in which neo-pagan pundit Starhawk declares that Thomas Jefferson was "deeply religious," even as she frames the debate over the separation of church and state as being between factions fighting over whether to amend the Constitution in favor of Hera or Pan. Some of the content, though, is quite engaging. In this video, journalist Christopher Hitchens discusses being moral without believing in any god. When the media abandon any test for truth in order to seem more progressively pluralistic, then we listeners, viewers, and readers have to do the tiresome work of separating wheat from chaff ourselves. Is there any newspaper out there willing to identify fluff as fluffy, mythology mythical, and religion as fantastical? 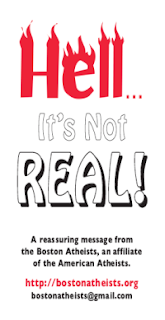 A NEW BOSTON ATHEISTS TRACT
Last Friday, I discovered a Christian witness tract on an empty seat in the subway. After a moment spent wondering whether Jesus of Nazareth should be sent a citation for littering, I put the piece of propaganda in my pocket. When I read it later, I was offended by its poor production quality, unstylish prose, and most of all by the malevolent threat of eternal damnation in the Christian hell which the author offered to all readers who have not yet joined a Baptist church and begun tithing regularly. As an Atheist, I think I can do anything better than a Christian*, so I set myself to the task of producing a better version. You can view the fruits of my labor at the Boston Atheists website, links below. The original is titled "Hell -- It's Not a Joke!", and my new version is called "Hell -- It Isn't Real!" Please distribute as you see fit, and let me know if you have any ideas for a NEW tract.

[* = This is something I obviously do not believe, but I like from time to time to try on the stereotypes in order to remind myself just what the community of believers thinks of all of us out here in the frozen barren wastes of disbelief.]

"... that's what we need to do -- to amend the Constitution so it's in God's standards rather than try to change God's standards so it lines up with some contemporary view."

So says Republican candidate Mike Huckabee. I think the above-mentioned Starhawk has a point: why should it be a given that we are going to rewrite the Constitution according to the Jewish sky god? I think we've been overlooking all that we stand to gain by returning to the worship of the Babylonian Marduk, whose ruthlessness might very effectively advance our national goals domestically and abroad. Huckabee's stumping for Jehovah; but I'll keep my vote in reserve, waiting for a candidate to appear who represents the Marduk constituency. I'll give you a dollar if you can tell me succinctly how the Tablet of Destiny differs from the Bill of Rights in any significant way. Alright, so that's all a bit silly. But Huckabee is a myth-believing moron who is somehow commanding huge support from myth-believers throughout the country, and that is more than a little troubling.

UNSCRUPULOUS ATHEISTIC STRATEGY
Yale Divinity student Gabriel Michael, writing in the Yale Daily News, makes a good point: that 'evangelical atheism' is more effective at galvanizing the faith of reactionary theists, than it is at convincing believers and the undecided that atheism is a correct worldview. This is a point I have heard made by many cool-headed, dispassionate commentators offering their opinion on the increasingly visible and vocal Atheism of the past year. But they're all wrong: not in saying that zeal and rhetoric are poor substitutes for philosophy, but because they either imply or declare that Hitchens, Dawkins, Harris, Dennet et al are *merely* zealous. All those writing against the "New Atheism" sidestep the brunt of the atheists' attack by claiming to detect a distasteful tone in their opponents, and thereafter condescendingly decline to take into account the arguments being made. Sorry, folks... you can't call for a time-out just because the other team is getting ready to mop the floor with you. If you don't like playing rough enough to win, then you better be prepared to leave the field in defeat. Ironically, most of the "vehement atheists" I've read this year have been far more civil and accommodating in their discussion than their religious detractors. By "playing rough" I refer to such low-down and barbaric tactics as "using rational arguments," "relying upon logic," and -- worst of all -- "treating mythology as incredible."
Posted by CivilizeMe at 12:57 AM