How True is This? 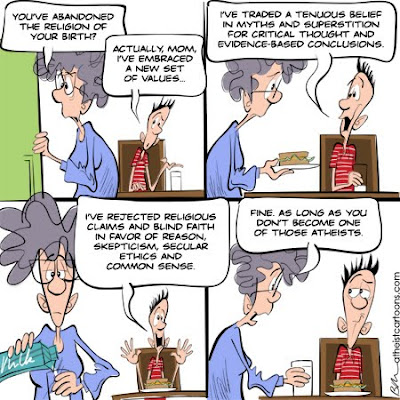 Now be honest, how many of you had the same exact conversation with their mother? I know I did. Granted I didn't use fancy language and just said I was just agnostic at the time and yet the reaction was just the same.

Years later I realized I was "one of those atheists", but I think my mother had time to get used to the idea.

While I find the cartoon amusing, it's also sad how true this is. Atheism is seen as a dirty word, and people would rather you call yourself anything but that.

In recent examiner articles I discussed how it can be harder to come out atheist as opposed to coming out gay, and how gay atheists can sometimes feel left out of the gay community.

In what other ways can atheism seem worse than an equally oppressed minority?
Posted by Jackie at 9:47 PM