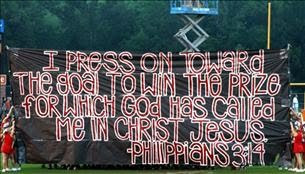 Here's the story. High school cheerleaders in Tennessee have been waving banners with Bible verses on them at school sporting events, an admittedly minor but blazingly obvious violation of church-state separation. The superintendent ended this practice. Some people see this as a problem. The article about this brouhaha has attracted several kinds of readers to the comment thread. Their responses display the full range of predictable attitudes, including:

- calls for complacency,
"I think they should allow the football team and the cheerleaders decide if they want the sign. Obviously the students dont have the problem it is an adult in the audience that has the problem. If that is what the students want then let them do it. Lets not limit their freedom of speech. If more schools would teach bible verses and right and wrong there would be less violence and vain activities going on in our schools. I say let the kids have their say. Let them show their feelings." [Username: Snooksie | On: September 29, 2009 at 9:45 a.m.]

- Aggressive bigotry... "If you READ the Constitution, the First Amendment guarantees Freedom OF Religion, NOT freedom FROM religion. There is a fundamental difference. It also guarantees Freedom of Speach. I would say that some ignorant people are trying to violate the cheerleaders Constitutional Rights. But then again Liberals don't care about anyone's rights but theirs, and the people that follow them blindly. Kind of like taking care of sheep while you're leading them to the packing plant..." [Username: grumpyoldb | On: September 29, 2009 at 4:24 p.m.]

- Complaints of persecution... "As long as it is STUDENT LED there is NO SEPARATION OF CHURCH AND STATE. All schools should support this and quit letting the select few be the voice for the majority. Pastor Martin Niemoller, who later became head of the World Council of Churches, and was an outspoken critic of the Hitler regime, gave a number of speeches in which he used various versions of the following well-known poem..." [Username: The_Badger | On: September 29, 2009 at 9:48 a.m.]

- Rationalistic irritation... "Yes I will agree that I disagree with many here. The worst is people repeating, repeating, repeating totally false statements. That is how stupidity prevails. Opinions are one thing, those will of course vary. I respect your right to have an opinion. Respect mine. I don't respect the right to make false claims (ie prayer taken out of schools)." [Username: FormerChattanoogaResident | On: September 29, 2009 at 11:09 a.m.]

... and so on. Food for thought, all this. A pressing question for our growing secular movement is that of engaging with those on the other side of the belief line. How can we persuade our neighbors that it doesn't serve religious freedom to promote the views of a single religion? These cheerleaders, well-intended though certainly seem to be, are unwitting enemies of reason, and allies to superstition and division.

To be clear, I don't think that these cheerleaders are the victims of overzealous anti-religionists using the Constitution to trample on protected speech (as I write above, the violation of the establishment clause is blatantly obvious). But they are victims -- of religious training. In such cases of mental abuse, I prescribe a strict regime of Sagan, Dawkins, Ingersoll, and critical thinking three times a day. Let us pray for their swift recovery, shall we?
Posted by CivilizeMe at 11:26 AM