Dennett in the Globe on the unbelievers 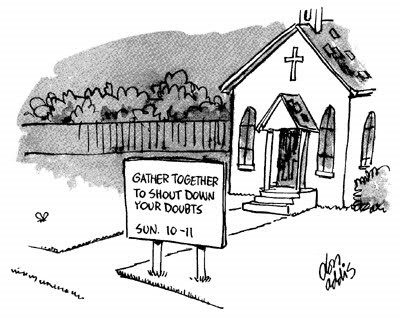 The Boston Globe today has an interview with Daniel Dennett, on his research into the number of clergy that lack belief in a higher power:

It’s true, here are these young people in seminary, they have come with the purest of hearts and the noblest of intentions and they’re going to devote their lives to God. And one of the first things they learn is textual criticism. They’re looking at all the existing papyruses and scrolls and so forth and learning about the recension of the texts — the tortuous and often controversial historical path from Hebrew, Greek, and Latin versions of the books of the Bible — and all the Apocryphal books that got rejected — to the King James Version and all the later English translations. And that’s not what they taught you in Sunday school.

That’s the joke that we often provoke from people when we talk about this: Anybody who goes through seminary and comes out believing in God hasn’t been paying attention.

The article cited in the interview, containing initial anecdotal results from Dennett's collaborative investigations, appears at the Washington Post website. An excerpt:

The interviews were all conducted by Linda LaScola, a clinical social worker with years of professional experience as a qualitative researcher and psychotherapist, and, until recently, a regular churchgoer. Like her co-author, philosopher Daniel Dennett, the author of Breaking the Spell, she is an atheist who is nevertheless a sympathetic and fascinated observer of religious practices and attitudes. For this pilot study we managed to identify five brave pastors, all still actively engaged with parishes, who were prepared to trust us with their stories. All five are Protestants, with master’s level seminary education. Three represented liberal denominations (the liberals) and two came from more conservative, evangelical traditions (the literals). (We decided to concentrate this first project on Christians, and we would have included a Roman Catholic or Greek Orthodox priest, for instance–if we had encountered any, but we didn’t.) We initially had six participants, but one, a woman in the Episcopal church, had a change of heart as we were about to go to press and, at her request, all further references to her and quotations from her interviews have been removed.

Posted by Boston Atheists at 9:10 AM