An unfortunate scene in "Jack & Jill" 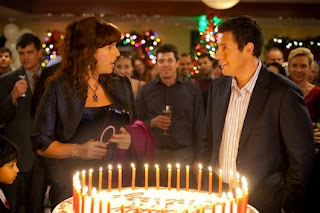 Most of the scenes in Adam Sandler's recent film "Jack & Jill" were unfortunate, I know (the critics seem to agree). But I want to hold one scene up for particular consideration, because takes a thoughtless, mean-spirited swipe at atheism:


Jack (played by Adam Sandler): Did I ever tell you that Todd is an atheist?
Todd (Jack's underling): Oh god.
Jill (played by Sandler in drag): A WHAT?
Jack: Hehe, have a great time guys.
Jill: How could there be a Grand Canyon if God doesn't exist?
Todd: (stammering) That's a very good point. I'm just saying maybe...
Jill: Maybe God wouldn't have given you a rat-face if you believed in Him!
Todd: I don't have a rat-face.
Jill: Yes you do have a rat-face, it's scary!
John McEnroe (playing himself, popping into the conversation from the crowd): Whoa whoa whoa wait a minute, this guy doesn't believe in God?
Jill: No!
Todd: (stammering) I'm, I'm, I'm just saying that there's no real proof...
McEnroe: (yelling) IDIOTS like you really make me MAD!
Crowd members: FIGHT! (chanting in unison) Fight, fight, fight...
(More people in the crowd join the chant, but as a birthday cake is wheeled in, their chanting turns into the "Happy Birthday" song.)

I don't object at all to seeing my worldview satirized -- may the nonexistent God save us from self-serious people -- but what I see in this scene doesn't pass the substitution test. By which I mean: if you replace the role of the implied majority viewpoint with that of the implied minority viewpoint (here, theism and atheism respectively), does the resulting exchange seem just as comedic, or does it reveal a darker aspect?

This isn't comedy arising out of cultural differences; it's antagonism made presentable by silliness. Thumbs down, Happy Gilmore Productions, for mixing prejudice with scatological humor. Though perhaps I can't call this a thoughtless mistake on the part of the folks behind the movie -- maybe it was actually a savvy business decision intended to attract a pro-theistic audience. The reviewers over at MovieGuide.com (" in-depth analyses of current movies from a biblical perspective") think this anti-atheist scene "makes belief in God look cool." Because cool is whatever Adam Sandler in drag is doing... ?

In other words, I think it's unfortunate that there's this bit of anti-atheist sentiment in a movie whose main business seems to be to affirming the value of family, and in making childish audiences laugh at fart jokes. Nothing wrong with those goals; why does prejudice need to be a part of it? To the people responsible, we might say: "Idiots like you really make me mad." Prejudice and the hostility it gives fuel to, when they reveal themselves in real life, don't just go away when someone shows up with cake for everyone.

I actually really like atheist jokes. Such as: "Why can’t atheists solve exponential equations? Because they don’t believe in higher powers." This is from the Harmonia Philosophica blog; find more here.
Posted by Zachary Bos at 9:05 AM