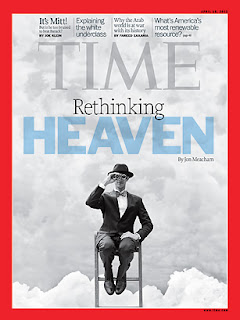 When I saw headline "Rethinking Heaven" on the cover of the April 16th issue of Time magazine, I thrilled at the possibility that a mainstream publication might have taken a critical position against the unimaginative but widespread conception of an eternal afterlife defined by a cumulus set-pieces and a golden halo on every head.

I was mistaken; rather than adopting a skeptical outlook, author Jon Meacham addresses contemporary believers with both a corrective view  -- citing affable scholars of religion to remind readers that the New Testament doesn't describe a heaven-in-the-clouds -- and an aspirational one: "What if Christianity is not about enduring this sinful, fallen world in search of eternal rest? What if God brings together heaven and earth in a new, wholly redeemed creation?"

On the one hand, this article is a believer's argument that Christians would do well to rein in some of the more excessive and unfounded aspects of their belief in heaven. On the other hand, this apparent return to a less decadent and more exegetically sound soteriology seems like an attempt to reconcile ideas that aren't compatible. I wonder, if we left the pop theology conception of heaven intact, whether we wouldn't be giving believers an easier job of seeing the ethical problems and logical imponderables inherent in the Christian definitions of eternity and redemption.

In the way that sunlight is the best disinfectant, we might think of absurdity as the best alarm bell. To a Christian who thinks that "heaven" is really about rolling up our sleeves and creating the best life for as many people as possible here and now, the skeptic's view that there's no such thing as heaven seems like a sad misunderstanding. "Oh, clouds and harps? That's a caricature, man! If you had a more sophisticated and orthodox understanding of my religion, you'd see how much sense the idea of heaven really makes." But the Christian who thinks that good behavior earns you a ticket to that everlasting wispy resort named Heaven, is wearing their cognitive dissonance on their sleeve. Those are ideas you can lay out, side by side, for a comparison to modern ideas of morality and cosmology.

Friendly arguments, like the one Jon Meacham presents in this article, present a stealth threat. An irrational and superstitious belief like "heaven" becomes easier to hold if its given an ad hoc makeover, and shorn of the more baroque details. If the evidence is considered without first making a commitment to belief in supernatural entities, Christians have every bit as much epistemological warrant for believing in Pearly Gates and angel choirs as they do for thinking of heaven as something God calls on us to create in the here-and-now. It isn't more rational to believe in this latter idea of heaven; it's simply easier.