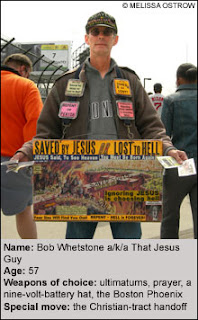 From the Boston Phoenix, a 2006 article by Camille Dodero about one of Boston's most widely seen street ministers:
Bob Whetstone may be the most famous man in Boston whom nobody knows. A lanky 57-year-old with oval glasses, a flat-brimmed trucker hat, and the perpetual tan of someone who works outside, he was so recognizable loitering on Brookline Avenue this past Friday that in just 30 minutes at least five different fans heading to the Red Sox game responded to Whetstone with a riot of pointed fingers, disbelieving guffaws, and I-see-him-everywhere whispers. Said one passerby in a pre-game-partying slur: “It’s that Jesus guy!”
Whetstone is a walking advertisement for Christian salvation — or, more precisely, a bipedal fire-and-brimstone anti-advertisement for not choosing said salvation. A congregant of the First Baptist Church in Chelsea, Whetstone doesn’t yell, shout, or preach — although his hat does scream heaven or hell/it’s your choice! Instead, he roams the streets wearing a large, vibrant sandwich board that indelicately illustrates the transition between earthly life and eternal life, complete with a pristine cross-shaped bridge traversing the scorching depths of hell and leading to the bright, happy-looking land of heaven.
Whetstone stands outside nearly every local professional sports game and every major concert, quietly brandishing these signs and passing out literature. He plans his music schedule by, uh, reading the Phoenix. “I mark all the concerts on a calendar — I got them all lined up for a couple months in advance,” he says. When there isn’t a special event during the day, he’ll roam around the subway or wander around Faneuil Hall. “I do anything with a crowd — doesn’t matter what it is.” When there are competing events, Whetstone will pray to the Lord, “Which do you want me to go to first, second, third?” He does this six days a week — at least. “Sometimes I don’t go on Monday if there’s not much going on,” he says. “You gotta take one day and slack off if you can.” Whetstone goes to Miami Beach every winter, he says, and stands outside clubs with a nine-volt-battery-powered hat that lights up the word repent. In the summer, he hangs around Hampton and Old Orchard Beaches.
Whetstone calls this his “mission.” His only boss is God. But God doesn’t pay him in the traditional sense. “I live by faith,” he claims. “I have no income, nothing from anybody — churches, government, anybody. Zero, absolutely zero.”
How do you —
“I pray to God,” he interrupts.
What about dinner tonight?
“When I go down to Quincy Market, there’re Christians down there,” he says. “They want me to eat there. They actually ask me to eat there.” Whetstone wants it known that he is no beggar. “I don’t ask for anything. You can follow me around for ten years and you’ll see I don’t ask for a penny. God brings everything to me.”
He says God brought him a car. His glasses. The Old Navy sweatshirt on his back. He’s vague about the details of how, exactly, God provided him with these things — and equally vague about where he lives, though he talks about having resided in churches and vans. And so while it seems almost unbelievable that a man can survive in Boston without a consistent paycheck — never mind that he winters in Miami Beach — he does wear that same Old Navy sweatshirt again and again.
Whetstone says that in June of 1993 the Lord told him to quit his job as a security guard on the North Shore to minister on the streets full-time. Previously, after having been born again at age 29 and moving to Massachusetts from Pennsylvania for Bible college, he’d worked as a chaplain and spent years rounding up people on buses for Bible classes on the North Shore. But he wasn’t initially thrilled about this new divine assignment. “I argued with God for two weeks before I finally started doing it,” Whetstone admits. “If I didn’t do it, then I was disobeying Him, and I don’t want to disobey God —”
“I keep seeing you!” interrupts a male passerby.
“Jesus loves you,” says Whetstone, offering a tract. “This is Good Friday, the day Jesus died for our sins.”
Whetstone says that the most difficult part of his “calling” is being single. “I could’ve got married a couple times. But if I’m going to be a husband, I can’t just have a woman put some food on the table and not be there.” He pauses. “That’s been the only thing, really, that’s been hard for me. Because, you know” — he swallows hard — “I’m a normal man.”
Right now, Whetstone is undertaking the normal-man act of checking his watch. He’s late for Faneuil Hall, then he’s coming back here to catch Sox fans leaving the game, then hitting some theaters “if I have time.” But right now he really has to go. When your boss is God, being late is not an option.
Posted by Zachary Bos at 12:48 AM