The insufficiency of a theological response to Haiti

Thus the whole world in every member groans:
All born for torment and for mutual death.
And o’er this ghastly chaos you would say
The ills of each make up the good of all!

-- Voltaire, from Poem on the Lisbon Disaster

This morning, Jackie Lavache -- an Assistant Organizer with the Boston Atheists-- asked me in her role as Boston Atheism Examiner asked me to put on my local organizer and State Director hat. She wanted to know what my response is to the news that a Christian ministry is spending time and money to send solar-powered talking Bibles to victims of the earthquake in Haiti.

My initial response is irritated revulsion. Hey! You! Get out of the way. Go back to church, study your scripture, and leave the problem-solving to us grown-ups who have learned to live in reality and to respond to reality in grown-up ways. This is an example of the consequences of believing honestly in untrue things. I can appreciate that the Christian folks at the Faith Comes By Hearing ministry think that they're helping to provide the most essential kind of relief, but thinking so doesn't make it so. Garbage in, garbage out -- when you believe in an eternal life after this one that can only be accessed through a relationship with a Bronze Age book, you're going to end up making some pretty wacky judgments about how to respond to crisis. What, there's been a natural disaster? Well, before we worry about food and water and infrastructure and medical care -- all of which cater to mortal needs only -- let's be sure we've got these poor people on board with the Gospel message. They might be battered, hungry, and hurt in the here and now, but they'll sure be glad in the long run that they've got eternity with God in the hereafter.

A friend pointed out to me that, since it is reasonable to guess that most Haitians are religious, solace of a religious kind will be greatly needed. True enough. I don't think that a good response to tragedy is to mock the faith of others and deny them the kind of comfort they are sincerely asking for. When I see that while some groups are sending food, money, and medicine, I have to shake my head at the relative placebo benefits of Bible study. But while I regret that religion is pandemic in Haiti, I don't think this is the moment for anti-religious crusading.

Now I read that Scientology is sending in personnel to do their version of disaster relief -- touch assists and detoxification, the usual flippery. Who knows how many prayer meetings have been organized already, and other calls to spiritual action. Certainly Christianity doesn't have a monopoly on well intentioned time-wasting. But: before we succumb to cynicism, let's consider that there are two separate impulses here. The first is the reflexive urge that human beings feel when others are in distress. Christians, Hubbardites, Atheists, all feel this urge. But then we have to channel this compassionate impulse into action, make decisions about how to help -- and that's when the worldview makes all the difference.

If you subscribe to untrue beliefs about reality, your judgment is likely to be impaired -- as we see when Christians pack and ship Bibles to Haiti, instead of diverting resources to aid agencies like the Red Cross. Or as when John Travolta uses his means to fly his fellow churchmembers down to Port au Prince to use the healing touch to accomplish exactly nothing.

Atheism doesn't have all the answers. It doesn't have any answers -- it is a doctrine-free worldview, one that consists simply and wholly of the lack of belief in deities. But at least atheism doesn't get in the way of our natural human impulse to HELP those in need. What we can learn from the response made by different groups to the Haiti tragedy is that people are most times better than their beliefs. And that people are better off without beliefs if those beliefs interfere with our ability to effectively discharge our duty as brother's keeper. What we can learn from the Haiti tragedy itself is that if gods exist, they are without question unworthy of our worship.

In such circumstances, let's put theology aside and roll up our sleeves. What's going on in Haiti isn't a "teaching moment." It is a natural disaster, and a call to action. The American Atheists website is reporting that Richard Dawkins has committed to paying PayPal fees (up to $10,000) for donations to Doctors Without Borders and the Red Cross. The Non-believers Giving Aid project provides a gateway to donate money to aid agencies that are known to be effective: http://givingaid.richarddawkins.net. I'd be surprised if any of you reading this haven't already learned how you can donate -- and if you hadn't already donated, knowing how generous you are -- but if you haven't, I encourage you to consider these agencies. They are efficient, and they are on the ground now. 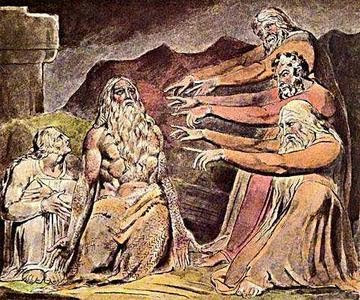 NB: The epigraph to this post comes from "Poème sur le désastre de Lisbonne," in which Voltaire considers the 1755 earthquake that killed perhaps 100,000 people in Lisbon, Portugal. This event challenged religious and nonreligious thinkers alike to reconcile their respective worldviews with the existence of such profound suffering. The Enlightenment soon followed.

Theodicy is the branch of philosophy which attempts to explain the existence of suffering. I admit to being impatient with this project of understanding evil; rather I'm wanting a chance to pass judgment on the Christian god and his crimes. The image above, an engraving by William Blake, shows the Biblical figure Job being rebuked by his friends. Let us instead imagine that this is Jehovah, all-powerful and all-loving, finally brought to trial in front of the mortal beings whom he created and who He has subjected to such terrible needless affliction. This wish-fulfillment is exactly the plot of James Morrow's "Blameless in Abaddon," an excellent novelistic treatment of theodicy.
Posted by CivilizeMe at 10:59 AM