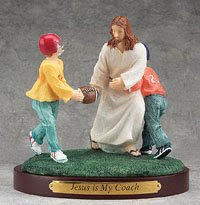 Some of you may be familiar with my (decidedly not compelling) Disproof from Mundanity argument, being that any deity worth his salt wouldn't be caught dead acting as an ontological foundation to material existence, seeing how so much of the world is crumbly, dirty, and ragged. Example: cigarette butts. If the presence of the Creator really does suffuse all of the universe, wouldn't a soggy butt floating in a toilet bowl be just as full of the divine spark as any child's eyes? By which I mean really nothing more than the god concept seems exceedingly silly in a certain light. This silliness is seen clearly when theists carry out the notion that theirs is an anthropomorphic god, to extreme ends. Although this has been seen elsewhere on the Net, really, it's worth seeing again. I present: Jesus playing football. Here's a question: does a child's willingness to tackle his Lord and Savior make him a better Christian, or a worse one?

As someone who doesn't subscribe to any religious belief, it's easy for me to enjoy a laugh at the expense of religion; I don't have anything invested in it. That doesn't mean atheism, for me, is just an excuse to disdain believers and their traditions. Far from it; since I am relieved of the influence of religious dogma, I have one less excuse to be belligerent, unsympathetic, or callous toward my fellow man. But because I don't laugh at theists, does that I mean I cannot laugh at the spectacle of the Nazarene accepting a forward pass?
Posted by CivilizeMe at 12:51 PM