Christian healthcare in the Houston Chronicle 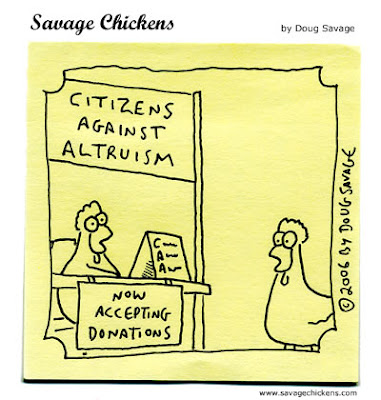 Apparently if you watch the sex and the smokes, your fellow churchgoer may pitch in to cover your medical bills. It wouldn't hurt if you drop in a little prayer to make sure they pay, though, since they won't be under any legal obligation to do so. That's the thing with insurance: it's assured. It should also be non-profit, but that's another blog post.

From an article in the Houston Chronicle:

Here's how it works at Christian Healthcare: Members send in a monthly fee, resembling an insurance premium, which can range from about $50 for a single person to $450 for a family of four. That money, along with the payments from thousands of other members, is then distributed to pay sick members' medical bills. [...]

But they've been steadily growing in numbers and prominence — so much so that the recent federal health reform legislation has language exempting members from paying penalties most uninsured Americans will eventually have to pay. [...]

Said Chandler, the UH law professor: “People participating in this do need to have a little concern about solvency. You've sort of got to be relying on God here that this scheme will work out.”[...]

There are, however, a few catches. The ministries require members to be Christian, and they check with pastors for confirmation.[...]

There are also health care costs that can't be shared, most notably abortions or sexually transmitted diseases contracted out of marriage. Participants must also refrain from using tobacco and avoid sex outside of marriage, among other lifestyle requirements. [...]

Instead of paying more than $700 per month for premiums, Mark McLeod, a self-employed Houston geologist, currently pays Samaritan Ministries about $300 per month to cover himself, his wife and four of his children in a sharing plan.

“Who is going to take care of you — a company or people? I'd rather put my faith in people who believe in God.” McLeod explained.

Emphasis mine. Judging from the people I've met in the non-god-believin' community, I'm glad to say that Mark McLeod would be happily surprised to see how much he can rely on people of evolved ethics who happen not to share his religion. I've got no problem citing Scripture on this one, Galatians 6:2, "Bear ye one another's burdens, and so fulfil the law of Christ."

Oh, you Bible you. Even a stopped clock is correct twice a day. For "law of Christ" here, read "the law of decency."
Posted by Boston Atheists at 9:22 AM