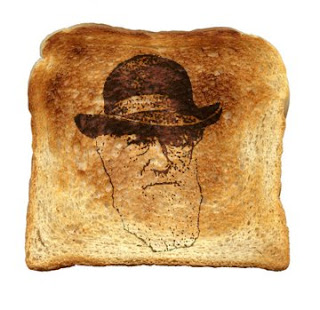 Over at YouTube, “Finally Tonight, Jesus…” is a compilation of the many, many moments of local news coverage given over to reports of religious apparitions in 2008.

We’ve all encountered theists whose best reason for believing the way they do is personal experience – the voice they hear in the back of their mind, the role they feel their deity plays in their life, the glimpses of the supernatural they see in the world around them. All of which are either signs of gods, or, erroneous interpretations of normal, non-spooky phenomena. Among the false interpretations theists put upon natural happenings, none is more comical than the idea that the all-powerful Author of the Cosmos would choose to reveal himself in a taco shell. And reporters love to meet people who see Jesus in a taco shell.

The widespread and hilarious habit of seeing messiahs in toast is a product of pareidolia. From the Skeptic’s Dictionary:

Pareidolia is a type of illusion or misperception involving a vague or obscure stimulus being perceived as something clear and distinct. For example, in the discolorations of a burnt tortilla one sees the face of Jesus Christ. Or one sees the image of Mother Teresa or Ronald Reagan in a cinnamon bun. . .

The reason you don’t see are Atheists on the 5 o’clock news, claiming to have seen Darwin’s beardy face peering out the woodwork just waiting for a more theatrical revelation, e.g. the simultaneous appearance of the word “GOD IS REAL” in flaming violet letters, six hundred feet tall, in the sky above every major city of the world. Of course, that is the kind of evidence that no rational person could deny. If the evidence for the existence for a deity were logically compelling (as flaming violent letters would be), then belief in that deity would be logically compulsory, and free will would be subverted, and any religion pretending that free will is compatible with the existence of their favorite god would have to revise their doctrines. Following this line of reasoning, Christians should expect exactly what we see: that the existence of their God will only ever be substantiated by unimpressive evidence. Anything less would be an attack upon free will!

Shoddy ad hoc apologetics aside, the real reason Atheists and rationalists don’t see Jesus in their Cheetos is that people who lack belief in the supernatural aren’t likely to attribute to the divine what can more readily be understood as common cognitive misfiring.
Posted by CivilizeMe at 7:14 AM