In response to Oprah Winfrey's biased comments against atheists in an October 2013 interview, the Boston Atheists are asking for support in asking her for an apology and some gesture of acknowledgment and affirmation toward the secular community. Whether that means inviting she invites Edwina Rogers, Eddie Izzard, and Stephen Fry for a sit-down on camera to talk about secular activism and atheist aesthetics, depends entirely on how much noise we can make about this! Please spread these images widely, and credit them to the Boston Atheists(a local affiliate of American Atheists. More will be posted in coming days, under the tag #atheistawesome.


@Oprah and @OWNTV, are you talking to anyone in the secular community? We're hoping for a response! #atheistawesome 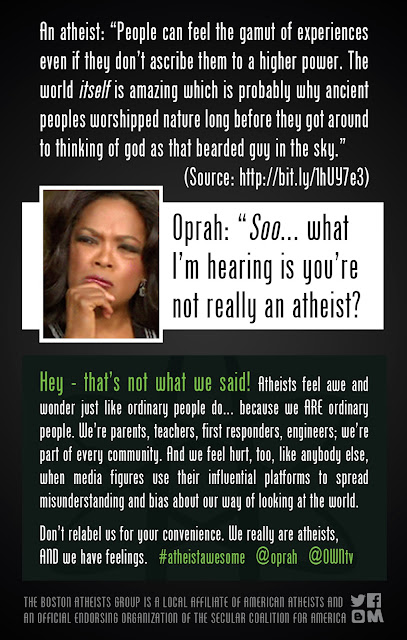